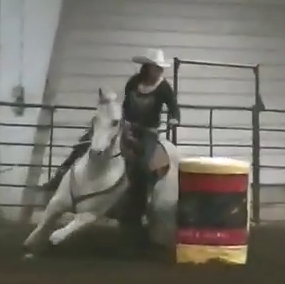 LIL EASY TOOTSIE, aka 'Bloomer' is 3/4 sister to FROSTYS LIL TOOTSIE, aka 'Tootsie'.  She is by LIL EASY FEATURE X LIL EASY CASH and out of a daughter of STAGE BAR TED.  Bloomer was a 2D/3D barrel horse until she was injured and now she is a broodmare at SEVEN MILE FARM.

Bloomer had a nice gray filly by JETTASTIC si105, LTE $193,000 X JET BLACK PATRIOT in 2019.  We named the filly FEATURE LIL MISS JET and is now owned by Bill Freitag in Henderson, Minnesota.  Bloomer had a beautiful black filly by EXCLUSIVE PERKS X JERRYS DISCO MOON in 2020.  We named this filly FEATURE DISCO MOON.  She is sold and will leave our farm after she is weaned.