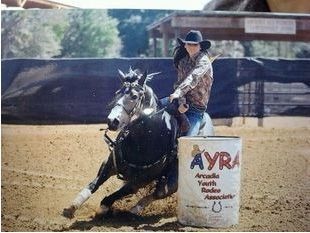 Dixie is a 1D/2D barrel horse. She is a beautiful 2005 buckskin Tobiano APHA mare that can really scramble! She can run barrels and poles. She isn't actually a 'broodmare'. She has taken a couple years off here and there to have babies. At some point, she will be back on the barrels.